With this update SeriesGuide uses https://www.themoviedb.org (TMDB) for show and episode data. This required some significant behind the scenes changes to the database and various parts of the app.

So, there will be bugs!

Note: An intentional bug is that Cloud sync no longer updates the last watched time of a show, if you mark an episode watched on another device. This will be fixed with version 59, once data should be migrated for most people.

Notable changes in this beta release:

This beta is only available on the Google Play Beta program. Learn how to join at https://github.com/UweTrottmann/SeriesGuide/wiki/Beta.

Thank you everyone, for testing, translating, giving feedback, sending in bugs or contributing!

Get SeriesGuide from Google Play

Unlock all features and support SeriesGuide

Uwe, help me understand here. Are we saying that in the backend of the app, the data for show times, description, and episode names is NO LONGER being pulled from TheTVDB, but TMDB? Do we know if TheTVDB has a sync with TMDB, or should we (as editors) make any edits to TMDB exclusively?

Yes, the app (no backend) fetches data exclusively from TMDB and Trakt now. Trakt itself uses TMDb info (and some others to get show release time IIRC).

Edit: data is not synced between TheTVDB and TMDB.

Does this mean IMDb links are removed? While I trust TMDB has good data, the gold standard of IMDb is my go-to for actor info.

I get an error when Autobackup is activated. Only error so far. Question : to update everything, I have the option on the top of the screen (update…manually). Does updating continue if my screen turns black? I think it doesn’t, but how can I know?

Trakt can’t even handle renames of seasons in TVDB, how are they going to manage a migration to TMDB? I can already see how I have to migrate stuff per hand or lose half of my trakt history…

But SeriesGuide seems to also not really work well right now. Countless shows have Seasons that don’t exist in trakt because they still use TVDB. So I end up with lots of broken data. Not really optimal…

Seasons and episodes that are not on TMDB are now removed from shows. This should be a better user experience, e.g. it avoids errors when setting watched on Trakt.

I’m going to have to strongly disagree with this update. I may have just lost a number of shows and I have no idea. This is very, very bad and not in any way a better user experience.

At the very least, please consider adding a Trash Can or Removed Shows folder somewhere so we can see if any shows get removed during the transition. I personally don’t care if Trakt doesn’t work. But I care a great deal if app data is lost!

The migration code does not remove any of your shows. If it can’t find a TMDB ID for a show, that show will remain in your database. If the TVDB ID is linked in the future on TMDB it will get migrated and updated again.

SeriesGuide will only remove seasons and episodes of shows that it found a TMDB ID for and these do not exist on TMDB.

What error message do you get?

If the IMDB ID is linked on TMDB, yes, SeriesGuide still tries to fetch it for a show.

Made a screenshot of it. 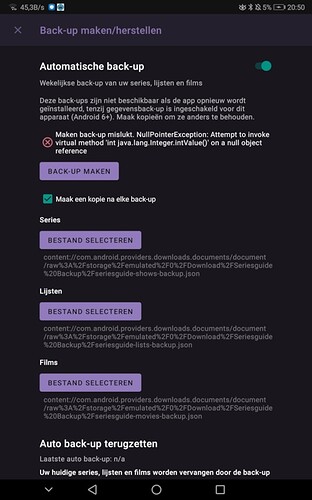 Thanks! Another user has reported this as well. I can’t find the cause so the next beta has additional error reporting that should help me find it.

Only error I found. Did a complete sync & download, everything worked fine (had to add seriesguide to exceptions in Huawei energy management, cause that terminated the sync every time). Looks like for most series there is data, I’ll just have to add some posters for Belgian series.

Turned off Autobackup for now.

Got a similar error, just with long instead of int.

Backup problem solved with latest update. Did a manual sync of everything after the update. But it is necessary to log out of seriesguide cloud, and log back in. Then sync with tmdb starts.

Syncing with seriesguide cloud is sometimes a problem. A progress counter would be nice. Had to log in and out a couple of times due to errors. Now I can log in and out without errors, and without a long syncing period. But there still is a problem with some episodes that don’t exist on tmdb. They are still present in seriesguide, but I get a message"can’t communicate with seriesguide cloud" if I want to mark them as read.

Just some general feedback to the change: While it worked fine for pretty much all western series, there seem to be a lot of differences for Animes which caused quite some to get their progress either reset or even wrongly assigned. Some of the issues I’ve seen:

Alltogether the migration worked better than expected, however with my 400+ series even those small discrepancies mean a lot of work to check what exactly happened. So it’d be nice to have some sort of overview to see where issues might have occured.

Thanks for your detailed feedback and observations! I’m aware of these issues and I don’t have a really good automated solution to split shows or differently grouped episodes. This is why I originally never wanted to move to TMDB. But now it’s either bite this bullet or let the app die. With more time I probably could write a manual migration tool, but I opted for an automated approach to meet the deadline of the TheTVDB API shutdown.

Also, originally the app left the episodes that could not be migrated (e.g. additional seasons not on TMDB). But that was confusing users, so the before last beta changed that to remove any episodes and seasons not found on TMDB.

Are there still bugs in beta 5?