A lot of TV Show posters have changed to foreign language or just simple disappeared. 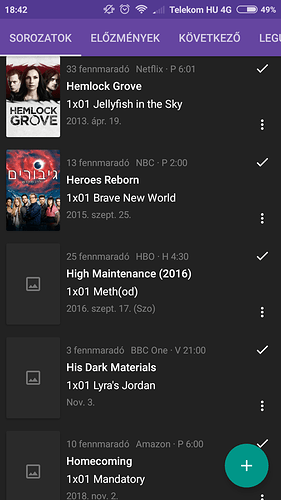 Thanks for reporting. For me this has resolved with a few exceptions, can you confirm?

Collected this issue and its status in an overview post: [TheTVDB] Issues with missing episodes, images, adding shows

Thanks for the response. The posters are displaying now, but still not the right ones. It doesn’t show the most voted, best posters. Almost every poster has changed compared to last week.

Note: There also was an issue where the SeriesGuide poster caching server did not allow the new subdomain used by TheTVDB for image URLs (https://artworks.thetvdb.com). I added it to the whitelist.

But this should not have affected existing posters. At least in my testing TheTVDB servers do not redirect image requests to this new subdomain, despite their forums saying otherwise.

@uwe I am still having problems, I added The Outsiders but the poster is blank.

@gerafa The only poster for that show does not seem to have a language set on it, so I guess that’s why.

Right, it looks like this is the cause. Is there a way to fetch posters without a language set on it?

I am asking it because I guess in future we will see more posters without a language in TheTVDB. When you try to add a new one, you can read “Select a language if there is text on the image.”, therefore if there is no text I guess users should leave the language parameter blank.

Just ran into this again, but with https://thetvdb.com/series/tournament-of-champions. If there is no language set there currently does not appear to be a way to query those images from TheTVDB.

In that case I just re-uploaded the existing poster and set a language (it did even have text on it, so probably an oversight of the original uploader).

Unfortunately right now the API isn’t optimized to pull images without a language set and it would take a considerable amount of time to develop. This will however be prioritized and addressed in our v4 which is coming out later this year. Apologies that I don’t have better news.

Well, I guess make sure the uploaded posters have a language set, even if the website recommends not setting one if there is no text…